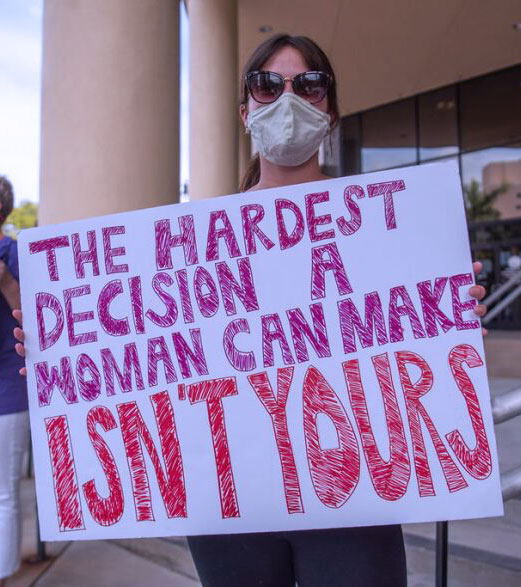 Choice and free will are the ultimate and inimitable gifts to us from our Creator.  These separate us from the animals and provide powerful opportunities to steer the trajectory of our lives and ultimately determine who we become.  A woman’s right to make the extraordinarily personal choice about whether to terminate a pregnancy can be one of the most difficult and pivotal decisions she will make – the effects of either choice have lifetime repercussions.  The experience of abortion is something millions of women have experienced for many decades, but there is no universal experience because each woman’s life and circumstances are different.  This choice is both rife with emotional and social complexity and charged with political and religious dogma.  And yet the relentless chipping away at this right to choose in our country has been the enduring obsession of groups driven and led in large part by white men.

The law has imposed itself directly into this issue via the Due Process Clause of the Fourteenth Amendment to the U.S. Constitution, which provides a fundamental “right to privacy” that protects a pregnant woman’s liberty to choose whether to terminate a pregnancy. This law has determined that this right is not absolute and has balanced it against the government’s interests in protecting women’s health and protecting prenatal life.  Current law holds that a woman’s right to choose is constitutionally protected, but not absolute, and subject to fetal viability.  This seems both a just outcome for the legal balancing test applied and a result that resonates with an intrinsic sense of where the line should be drawn with most people.

Yet, we enter 2022 with 21 states in the U.S. poised to ban or severely restrict abortion if Roe v. Wade is weakened or overturned.  One must ask what is the driving force behind this intense effort to severely curtail a woman’s right to choose.  Let’s start with the fundamental fact that the movement to limit women’s right to choose in the U.S. is associated with several Christian religious groups, especially the Catholic Church, and frequently allied with the Republican Party.

The terminology used to define the framework for the conversation in which we are led to participate is both divisive and charged from inception.  To be fair, both “pro-choice” and “pro-life” are examples of terms labeled as political framing: they are terms which purposely try to define their philosophies in the best possible light, while by definition attempting to describe their opposition in the worst possible light. “Pro-choice” implies that the alternative viewpoint is “anti-choice,” while “pro-life” implies the alternative viewpoint is “pro-death” or “anti-life.”  All this rhetoric serves to steer us away from the real issue – the choice that each woman has to continue or terminate her pregnancy before the fetus is viable.

I cannot help but conclude that this most recent push is the last gasp of the white-male misogynistic archetype sensing its imminent extinction in the pending emergence of a majority “minority” U.S.  population and an emerging united rise of women and their power.  The very framing of the issues still subtly (or not so subtly) casts the choice to terminate pregnancy as the ultimate rejection of motherhood, the perpetuation of the mythical cold-blooded career woman, the image of the promiscuous slut, and, ultimately, the centuries-old fear of the power of women.  The reality is that this fundamental choice often involves self-defense against poverty, lack of education and opportunity, stigma, the violence of men, and/or protection from a life where choices become far more limited and opportunities for repression far more plentiful.

But, in the bold arrogance of this overreach for mass limitation, could it be that we have been handed a gift of opportunity?  The potential for an emergence of a collective female energy so sorely needed as a solution to societal problems lie in the ability of women to unite across lines of race, age, socio-economics, religion, and even party lines.  Without this, our collective intensifying social divisiveness, escalating violence, and increased tension around our country’s history of racism (among other things) continue to fester and grow.  Could there be an issue that would evoke anything more primal and unifying than the issue of our personal choice to reproduce?  Our collective outrage can and should create sufficient energy to both motivate and bind us – to allow us to cross ethnicities, cultures, faith traditions, and so much more – to begin to ignite the underutilized collective power of all women working together.  It is up to all of us to initiate and join the conversations and to listen to and engage others, especially those who don’t look like us and may bring a different perspective.  It starts right here, right now.